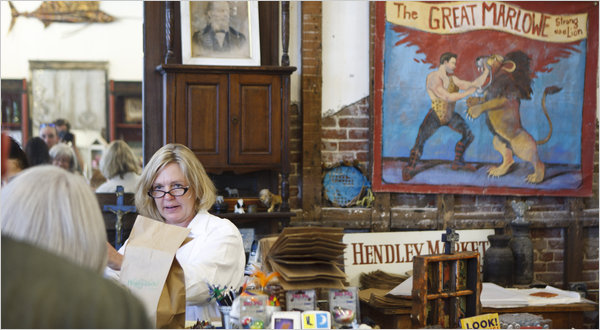 GALVESTON, Tex. — The crayons and paper were out, but not too many children made it to family day at the Ocean Star Offshore Drilling Rig and Museum.

Granted, the exhibits of pipelines and seismic vessels may have been over the heads of many grade-schoolers. And despite a few cheerful displays about marine life around rigs and all the bounty that oil helps provide — including Barbie dolls and cellphones — the message of the museum is that offshore drilling is complicated and potentially risky, a big business overseen by grave-looking men whose mostly unsmiling faces line the Hall of Fame.

This island city, a tourist destination surrounded by drill operations and refineries, is being reminded anew about those risks, now that oil and other mysterious substances have been washing up on the shores — the first time the impact of the oil spill has touched Texas.

The mayor, Joe Jaworski, began a whirlwind of promotional events and appearances, canvassing beaches and creating a video to remind people that it was still business as usual in town.

“O.K., so tar balls have washed up, and I think we’d all agree, it’s not a disaster, it’s a nuisance,” Mr. Jaworski said in an interview, after doing a radio broadcast with a visiting Houston D.J. from the lobby of one of Galveston’s largest resorts.

“This thing put everyone on alarm,” he said. “We’re dealing with it in the best way we can.”

For weeks, officials in Texas have expressed sympathy for those hit hard by oil contamination in Alabama, Mississippi and Louisiana without having to confront how it would effect their shores. Now the arrival of the spill — albeit in small amounts — has demanded a reaction that puts a twist on the complicated and lucrative relationship Texans have with big oil companies.

Will we “continue this perpetual cycle of disaster — is that what we’re going to do? — frustration, the blame game?” Gov. Rick Perry asked in a speech on July 6, two days after the tar balls were discovered in Galveston. He announced the formation of the Gulf Project, a research group that monitors the offshore industry, adding: “Frankly, we don’t have time to waste.”

But he also called on the industry for support, noting its “professional insight and much-needed funding.”

Lucy Nashed, a spokeswoman for Governor Perry, said the state was taking “aggressive steps” to deal with the spill. “Now that the oil has reached our shores, we expect both BP and the federal government to treat Texas the same as other states that have been impacted by this disaster,” she said.

Keeping tourism afloat is crucial for Galveston, which is still recovering from the devastating impact of Hurricane Ike in 2008. In the aftermath, 10,000 of the city’s 60,000 residents permanently fled. Many who stayed are still awaiting federal money to rebuild. Tourist shops offer books documenting “The Storm” and businesses have signs pointing to the high-water mark. Some reopened barely a year ago.

“This is not what I needed this summer,” said Cheryl Jenkines, the manager of her family’s antiques and accessories shop, Hendley Market, a downtown fixture for 30 years. She began to cry. After Ike, she explained, her store was flooded with 10 feet of water; she was knee-deep in mud during the cleanup. The store reopened in May 2009, but only for three days a week and at a third of its original size.

Coupled with the economic slump, Ms. Jenkines, 51, worried that any negative attention from the oil spill would torpedo her business. “There are a lot of sleepless nights,” she said.

Some are hoping to get BP to help ease the financial strain.

Katie’s Seafood Market is a sliver of a shop that sits dockside in the shadow of the oil rig museum. Three of its boats are still working the gulf, 150 miles out, picking up fillings for the fish tacos in Galveston’s cafes and red snapper to supply the East Coast.

But Keith Guindon, the owner of Katie’s Seafood Market and treasurer of a trade group, the Gulf of Mexico Reef Fish Shareholders’ Alliance, said he was preparing to file a claim with BP for lost income. “I’d be foolish not to be nervous,” Mr. Guindon, 54, said. “Just the perception can really hurt things now.”

Last week, a representative from BP came to the Galveston City Council meeting. “He seemed like a credible fellow,” Mayor Jaworski said. “He came right up and listened to us and said he would help us pay for public relations.” A spokeswoman for BP said no deal had been reached yet.

Others are shrugging off the news about the beaches, which have seen oil many times before. In the 1970s and ’80s, slicks and tar balls were such a common sight on the beach that owners of vacation houses stocked their patios with baby oil and WD-40 for guests to clean off with, and regular visitors kept a separate pair of “tar sandals.”

Teresa Sauer came to the beach from nearby Santa Fe, Tex., with her sister, Melisa Packard, and five children between them. “It’s been on the news and we decided to get up and come today, just to have a little fun in the sun,” Ms. Sauer said. “I don’t think it’s harmful to have a few tar balls. I think it’s normal, with all the ships coming through.”

Galveston’s tangled relationship with the energy industry — and with BP in particular — is made thornier by the explosion at the company’s refinery in neighboring Texas City in 2005, which killed 15 workers and injured more than 170.

Alongside accounts of the oil washing up, The Galveston County Daily News carried articles about a $3.4 million grant BP was about to give a local school system as a penalty payout.

“I think people generally are very concerned with BP’s safety record, and that’s no big secret,” Mayor Jaworski said, though he added that there was still a “loyalty” to the energy industry among his constituents.

Ted Williams, 58, a construction worker who lives in Texas City, watched a stretch of the Galveston beach cleaned of plants covered in oily goo. He said he believed that BP executives should be jailed. “The message would be, ‘You can’t cut corners,’ ” he said.

But others were more forgiving of a company that has poured money into the local economy.

S. C. Inman III, 64, an owner of five businesses in Galveston, including a surf camp and restaurants, praised BP’s contributions to the community. A team from the oil giant always participates in his cook-offs. “They’re a good neighbor,” he said.

An article on Friday about the effect of the Gulf of Mexico oil spill on the Texas coast misstated the origin of tilapia sold at Katie’s Seafood in Galveston. The fish were farm-raised in fresh water in China, they were not caught in the Gulf.